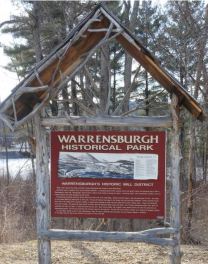 Nestled in a little valley, centrally located in Warren County, Warrensburg has become affectionately known as the Queen Village of the Adirondacks. The natural endowments which surround the entire area proved the town to be aptly named.

The first seasonal inhabitants of this area were the Indians. A huge boulder (since removed) was at the entrance to what is now the South East entrance to the Adirondack Park. Back then, it was a place where the Indians met. Later, during the early 1790’s there was trouble between the government and the Indians. The old Indian trail leading from the Mohawk River, past the base of Crane Mountain (seen in the distance as you enter Warrensburg) to the lake was yet to be open, and the memory of former Indian raids was still fresh. The residents gathered from the surrounding wilderness homes to the hill at the rear of this big rock and built a block house with port holes against Indian attacks.

Man had little to do with setting most of the town’s boundaries. They were decreed by Nature, with the Schroon river on the east flowing south and then west to join the Hudson, which forms the town’s western boundary. The resulting hour-glass shape is not inappropriate, for time and history have long been the preoccupation of the town’s citizens. The tradition of hospitality is almost as old as the town. For the next century, the town’s hotels accommodated travelers, serving trout and venison and other game. By the turn of the century, in the Town of Warrensburg, boarding houses flourished. They featured good cooking, lots of food, comfortable rooms, and front porches on which the visitors could sit and rock and watch the distant mountains turn purple in the evening dusk.

The birth of Warrensburg may be directly traced to the existence of this natural beauty. The Schroon River, in its meandering journey toward a meeting with the Hudson, very nearly bisects the village. Along this stream and some of its larger tributaries, several saw mills were constructed, and it was from the success of this industry that other mills and factories were built, thereby guaranteeing the growth and prosperity of the community.

William Bond, it is generally agreed, was the first settler. He established residence on Lot No. 1 near Bond’s Pond in 1786. This body of water, covering an area of same ten acres, is now known as Echo Lake and is a favorite bathing and boating spot for local and summer residents. Following William Bond to this area came Joseph Hutchinson, Josiah Woodward, Gideon and Stokes Potter and Joseph Hatch in 1787. Prominent among the early residents was Kitchel Bishop, who came in or about 1804. Judge Bishop was in the State Senate from 1812 to 1815. Pelatiah Richards moved to Warrensburg near the turn of the century and became well known as a leading merchant. He was town clerk in 1825, supervisor in 1830 and again in 1838. The Richards Library was a gift to the town by the family of this energetic man.

James Warren arrived in 1804. He became proprietor of a tavern and also managed a store prior to building and operating a potash factory. Mr. Warren drowned in the West River, as the Hudson was then called, in 1811, as he was returning from an election. History relates that his son, Nelson, was in the boat with his father and, though but ten years of age, his hair turned white as a result of the terrifying experience.

All published references to the naming of the town, starting with Smith’s History of Warren County in 1885, have said that it was named for James Warren. Warren was an active and prominent resident. He did not arrive here until 18 years after the first settler and was preceded by several others of equal or greater prominence. If the town was to be named for some local resident, which was not too common a practice, it is just as likely, perhaps more so, that the name of Kitchel Bishop might be chosen. Long before James Warren’s settlement in town and before the naming of the town a piece of land on the east side of the Hudson River was known as the Warrensburg Tract. This land was patented by the State of New York and sub­divided for the purpose of paying off Revolutionary War soldiers. It is quite possible that this name, and following it the name of the town, came from General Joseph Warren, as did the name of Warren County. Town and county were established and named within a month of each other in 1813. It is a, matter which probably cannot be proved either way now.

Though farming was a popular means of livelihood in the early days, the farms were comparatively small and new industries began to provide jobs for the growing community. In addition to the saw mills, two grist mills were constructed, a tannery was put into operation and the production of potash became quite extensive. Warrensburg was established as a town on February 12, 1813. The first town meeting was held on April 4, 1813 “at the house of Mrs. Melinda Warren.” This location would be across the street from the present town clerk’s office, since Mrs. Warren continued to operate the Warren House after the death of her husband, James Warren. The first officers of the town consisted of the following persons: supervisor, James, L. Thurman; town clerk, Myron Beach; assessors, Dr. Harmon Hoffman, John McMillen and Joseph Norton; commissioners of highways, Dr. Thomas Pattison, Whitman Cole and Albro Tripp; overseers of the poor, Dr. Harman Hoffman and Dr. Thomas Pattison; constable and collector, Samuel Stackhouse; fence viewers, Myron Beach and Dr. Thomas Pattison; poundmaster, William Hough. There were twenty-two pathmasters.

It is interesting to note that predatory animals were a problem for consideration by early governing bodies, for bounties of varying amounts were offered for the killing of wolves, panthers, wildcats and lynxes. As at the present time, our predecessors were concerned with welfare. At the first town meeting, $50.00 was appropriated for the support of the less fortunate. In the following year the amount was raised to $75 and in 1817 the sum had reached $200. Though roads to other communities in the county did exist to some extent at the turn of the century, it was not until 1849 that a plank road was constructed between Warrensburg and Caldwell. In the following year the same type of road was built north to Chestertown. Pelatiah Richards, Joseph Woodward, B.P. Burhans and Thomas S. Gray were chiefly responsible for the construction of these roads.

The first of the taverns was built in 1789 by James Pitts and could accommodate forty guests. This property, the Warren House, was owned or leased by several different persons and sold in 1878 to John Heffron. Alton Nelson and John McLaren began construction of the Adirondack House and it was finished by Edmund Richards in 1825. This tavern could accommodate about forty people.

The town continued to grow as a result of its varied manufacturing interests and from a record dated January 1, 1861, we find the following note: “The village contains some 700 inhabitants and has 2 Public Houses, 10 stores, a Tin and Stone establishment, 2 Tailors, 4 Book and Shoe Stores, 2 Saddle and Harness Makers, 2 Wagon and Sleigh Makers, 2 Cabinet Shops, a Sash and Blind Factory, 3 Physicians, 2 Lawyers, 2 Churches (Methodist and Presbyterian), 2 District Schools and a flourishing Academy.”

With the once easily obtainable raw products becoming scarce, many of the early mills were forced to close during the latter part of the nineteenth century. However, the town remained primarily a manufacturing community and during the early 1900’s could boast of several saw mills, a shirt factory, a woolen mill, pants factory and a pulp and paper industry. There are now five saw mills, a dress factory and paper mill in operation. The A.C. Emerson and Company saw mill is one of the few remaining water-powered lumber mills in New York State. The original mill was built in 1818 by Dudley Farlin. In 1885 this mill was sawing 3,000,000 feet of lumber a year on a gang mill containing 70 saws and four gates.

The downtown district of Warrensburg was virtually destroyed by fire during the late 1920’s. Rebuilding this section was comparatively slow, but as of this date few evidences remain of the disastrous conflagrations. The erection of new structures at these sites and throughout the town as well, has changed the face of the Queen Village and has added an appearance of stability and permanence.

In the center of the village stands a large circular bandstand, erected as a tribute to the memory of Floyd Bennett, Warrensburg’s most famous son. Bennett was born in Caldwell on October 25, 1890 and lived on Harrington Hill in Warrensburg until he was 17. He became interested in mechanics, engines in particular, and studied them at every opportunity. December 1917, he enlisted in the Navy and continued his studies at Norfolk. His ability drew the attention of Commander Richard E. Byrd and when the latter planned polar flights, he chose Bennett as mechanic and pilot. Their historic flight over the North Pole was accomplished on May 9, 1926 and for his part in the venture, Warrant Officer Floyd Bennett was awarded the Distinguished Service Medal by President Coolidge. While on an errand of mercy, he was forced down in Quebec and, though Charles Lindbergh flew serum to the hospital from New York, he died on April 25, 1928 and was buried in the Arlington National Cemetery.

Due to its proximity to the natural beauty of the Adirondacks with its abundance of lakes and streams and because of the improvements in highway travel, Warrensburg now enjoys a reputation as a resort town. Several motels have been constructed in recent years and improvements made in the hotels to accommodate those who would enjoy the quiet and friendly surroundings. A municipal recreation field and golf course is available at no cost. Echo Lake provides ample bathing facilities, and a beautiful golf course is located on the banks of the Hudson River. During the winter months, a skating rink is available to advocates of the flashing blades, and ski slopes have been cleared and a tow installed at Hickory Hill. What with its manufacturing interests and expanding resort business, Warrensburg seems doubly assured of a bright and successful future.

Summer is no longer the only season for vacationers. Spring brings honeymooners and fishermen. Fall attracts hunters and those who prize the brisk air of autumn and the miracle of flaming leaves. There are facilities for golf, tennis, and swimming within the town, and the magnificent Adirondacks are its front yard. With the construction of the State-owned Gore Mountain ski center at North Creek (28 miles) and Hickory Hill within the town, the large number of winter sports fans asking for accommodations has persuaded most of the motel operators to remain, like the hotels, open year round. Yet with it all, Warrensburg retains its dignity and its charm as a typical upstate village which remembers its past with pride and looks confidentially to the future. The town is within easy driving distance of the famous night spots, watering places, and special attractions, including the race tracks and Performing Arts Center at Saratoga, the Lake George Opera Festival and the Adirondack Music Festival. For those who seek the peace of quiet places, Warrensburg meets the test.

Warren County Centennial 1813-1913 A Hundredth Anniversary of the Formation of Warren County, NY

Printed by the Printing Department of the Glens Falls Post 1963

Other Places of Interest Regarding the Heritage and Historical Background of The Town of Warrensburg: